In Part 1, I noted that the conversation of what vegetarianism is and is not has been ongoing as a contemporary issue since the early 1800s. In Part 2, I review highlights of the historical context when vegetarianism lost its vegan meaning and the circumstances surrounding the creation of the term “vegan”.

As a preview, Part 3 will demonstrate the multitude of definitions for vegetarianism and veganism as written by organizations A through G. For Part 4 we’ll look at everyday examples of products labeled “vegetarian” and how this leaves everyone guessing about what is in the box, the bottle, restaurant—and organization. I’ll advocate we formally (and compassionately) separate the definition of veganism from any reference to vegetarianism in Part 5. Donald Watson’s comments in his later years are instructive for what veganism must accomplish.

My intent is not to put vegetarians on the defensive. I ask for your patience to follow through this thought exercise with me. Challenging the traditional sense of what “vegetarian” means may, by its nature, make some readers uncomfortable. Please remember this is the same discussion started by the founders of contemporary vegetarianism and veganism.

We live in a different era than the founders and early members of vegetarian and vegan societies. We learned from them, built on the  foundation they laid, and thank them. Donald Watson and friends struck out to coin the term “vegan” and founded The Vegan Society because it  was necessary. Circumstances again create another urgent necessity—and opportunity—to rescue veganism from the confusing discourse of vegetarianism.

In our era, we know more than our predecessors about the science-based evidence of sentience, nonhuman personhood, and the physical and psychological needs of individuals from other species. We know more about their communities and experiences as domesticated and exploited individuals—as well as those living in the wild. We have a more accurate and abundant knowledge of nutrition for sustainable raw vegan diets as well as processed food alternatives—available choices that make change to veganism easier than ever before. We have access to amazing educational resources where knowledge is made available to a greater number of people every day, to anyone able to access a book, flier, and the internet.

With all of that, the power and growth of the vegan message and vision are diminished by our ineffectual use of the term “vegan”. This stems from how vegetarian organizations and many of us define and report veganism. We’ve become sloppy. My focus on “vegetarian (-ism)” and “vegan (-ism)” as terms starts with a brief review of when vegetarianism lost its vegan meaning.

In the 1830s, the original use of the word “vegetarian” indicated a person who lived on a vegan and predominantly raw food diet. After the founding of The Vegetarian Society in 1847, the word “vegetarian” came to indicate a diet that allowed eggs and dairy for those who chose to do so. There were debates about that change, but it remains the legacy we inherited. Yet, we still believe that vegans are somehow vegetarians. That causes harm.

In December 1943, Donald Watson gave a talk to The Vegetarian Society on vegetarianism and the use of dairy products. In August 1944, he and others discussed forming a sub-group of non-dairy vegetarians within The Vegetarian Society. The Vegetarian Society eventually refused to give them space in its journal. The non-dairy vegetarians were also non-egg and non- everything animal exploitation but eggs were in scarce supply during these WWII years and not as often mentioned. There was sympathy from the Society, but they felt that “the full energies of the Society must continue to be applied to the task of abolishing flesh-eating”. The creation of the word “vegan” and subsequent founding of The Vegan Society in November, 1944 is often credited to Donald Watson or he and his wife Dorothy but Watson credits a number of his fellow vegans as well.

The Vegan Society revised its definition of veganism over time. In 1969,  it defined “veganism” as: “[…] a philosophy and way of living which seeks to exclude—as far as is possible and practicable—all forms of exploitation of, and cruelty to, animals for food, clothing or any other purpose; and by extension, promotes the development and use of animal-free alternatives for the benefit of humans, animals and the environment.”

It is important to remember that the founding of The Vegan Society and its veganism formalized two parallel and cooperating dietary social movements that grew over time to other countries and people. Watson and others believed it was important to stay within the vegetarian movement despite the differences that pained him and other vegans. Note what Watson, who in his address to the International Vegetarian Congress in 1947, said,

“The vegan believes there is nothing in the idea of vegetarianism so long as this regrettable practice of eating more dairy produce continues. Indeed the use of milk must be a greater crime than the use of flesh-foods, since after all the exploitation of motherhood and calf killing the cow must face the slaughterhouse. Thus the dairy cow suffers far more than the bullock taken from the field and slaughtered.”

Their decision to remain under the umbrella of vegetarianism is understandable given the relatively small number of people who then self-identified as vegans. Vegetarian and vegan organizations evolved and grew beyond England. In the U.S., the American Vegetarian Society formed in 1850 but ended several years later for a number of financial reasons and deaths of key founders. I found they sounded more like vegans which reflected that many members were at the time. Despite the American Vegetarian Society demise, other vegetarian organizations remained and grew further. The first U.S. vegan society was founded in 1948 in California. They merged into the American Vegan Society that was formed by H. Jay Dinshah and others in 1960.

What was inspiring in the early vegetarian and vegan social movements was their connections to other progressive social movements like the abolition of slavery, women’s suffrage and spiritual betterment, often under the leadership and influence of church congregations that practiced veganism. Here is an example of an 1850 vision for vegetarianism: “Vegetarianism unfolds the universal law of man’s being. Its observance is a stepping-stone to a higher stage of existence, and removes obstruction which hinders the fulfillment of man’s highest aspirations, and it is the inlet to a new and holier life.” Vegetarianism was part of a larger way of living, influencing, and being in the world.

That historic passion by people who sought higher consciousness and purpose still warms vegetarianism. The fact that over time vegetarianism became something different than the veganism that grew from it means some people and organizations today want the original “vegetarianism” brought back as it was before the Vegetarian Society consented to dairy and egg consumption. That is unlikely to succeed for a number of reasons. Perhaps most formidable is the fact that the definitions of vegetarianism and vegetarian are owned internationally by hundreds of millions of people who consume dairy and other animal-derived products. They claim vegetarianism as well.

The vast majority of the world’s vegetarians live in India. At 375 million strong, India vegetarians represent some 70% of the estimated half-billion vegetarians in the world. An overwhelming majority are lacto-vegetarians due to cultural and religious custom that existed long before the English terms vegetarian and vegetarianism were introduced. There are few vegans and resources for vegans in India. Restaurants are identified as vegetarian, non-vegetarian, and pure vegetarian. 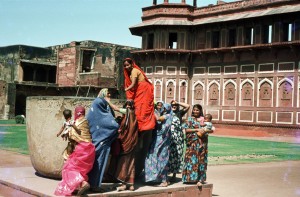 Around the world, as in India, wealth taken from ecosystems is annihilating the lives of nonhuman animals. Increasing human prosperity is creating enormous demand for meat, eggs, and dairy. In India, over half of its people describe themselves as omnivores. They and the lacto-vegetarians have made India the leading dairy producer in the world. India’s massive vegetarian population exploits cows and their calves. Despite Hindu dictates about the reverence for cows, they are killed like they are in the U.S. and elsewhere when their productivity declines after a few years. As the reporter in The Hindu wrote in 2014,

“Beef and milk are two sides of the same coin, especially in India where cattle and buffaloes are farmed primarily for milk. There are no ‘beef’ animals in India. Yet, bovine meat constitutes 62 per cent of India’s total meat production. Beef, in India, is sourced from the dairy industry, which is economically sustainable only because it is supported by the meat and meat by-products industries (such as leather).”

Being a lacto-vegetarian in India offers no relief for cows and their calves. In addition, much of the cow and buffalo milk is sourced from small rural farming families, likely making change away from milk products slow to come. Still, it is consistent in that vegetarianism anywhere offers no relief. Trying to restore an 1800s definition of vegetarianism would have to overcome entrenched global uses of the word. It is relatively easy to re-establish veganism as a separate term, idea, vision, and solution to the violence and injustice we know so well. If we fail to reclaim the terms vegan and veganism, then “vegetarianism” will continue to state that vegans are vegetarians in a list of definitions so complicated that it harms the vegan movement.

Part 3 will address the core issue of how vegetarian organizations define and use veganism interchangeably with vegetarianism. The chaos this creates undermines chances that veganism will succeed in its promises.

7 comments on “Are Vegans Vegetarians? Part 2”